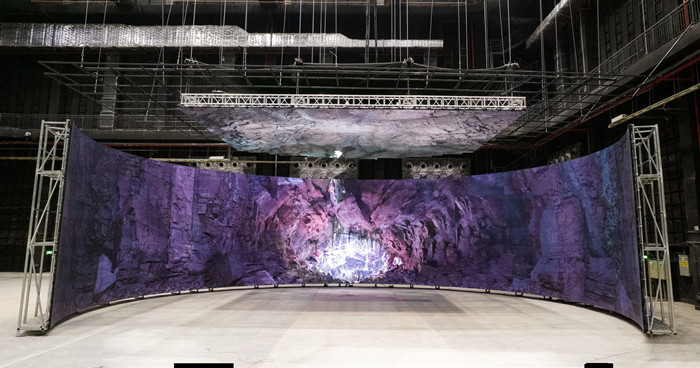 What is it that attracts so many giants to invest heavily in building LED virtual studios?

1, the use of LED virtual studio site directly shot close to 80% of the effect of the finished film, without waiting for the post, what you see is what you get

In traditional filming, special effects are produced at the very end of the production chain, which means that the actors, cameramen, and even the film’s director are uncertain about the final presentation of the film during pre-production.

For example, the cinematographer needs to guess which lighting color best matches an unseen green screen element, or the director has no idea how the creature will appear in the climax of the film. If the final post-production is not as good as it should be, it can be costly to make changes in the good case, or in the bad case, there is no time to make changes because the project is close to launch. Compared to traditional production techniques, virtual production puts the creation of assets in the early stages, allowing the production team to develop a matching shooting plan in advance through pre-visual effects previews, and even on the day of shooting the asset material within the LED can be adjusted in real time through UE. This greatly saves time in post and reduces the risk of filming.

2, solved the safety of dangerous shots to achieve, the difficulty of shooting the layout of the scene is greatly reduced

Take the scene of the battlefield in the short film, for example, the traditional shooting is limited by the actual conditions, explosions, war scenes require the collaboration of multiple departments and cost a lot of set-up costs. In contrast, the LED virtual shooting method through the LED screen to show a high-fidelity picture, the foreground production requires only a small part of the construction.

3, the weather, the light changes at any time, you are still waiting for a shot to sunset?

Imagine, the traditional crew to shoot the sunset scene at dusk in the real scene, usually to take into account the time and weather elements, but in the LED virtual shooting, we can always change the weather conditions through UE operation and by matching the studio lighting effects to keep the shooting scene in the way we want.

4, immersive, actors quickly into the state

Traditional green screen shooting, when the actors and crew members are used to staring at the same monochrome screen for a long time, and in the performance from the story, there will be “green screen fatigue”. LED virtual shooting through the front and back of the set and the integration of light and shadow, so that actors can perform in front of the actual image, you can let them as quickly as in the shooting location, thus greatly enhancing the efficiency of the shooting.